100% owned project in the battery corridor of Arizona

Big Sandy is characterised largely by flat-lying basin sediments comprising predominantly of analcime and potassic alteration zones. The green lacustrine lithium bearing horizon is traceable for over 11km from north to south and extends at least 2km to the east as a flat sheet at or near surface.

In February 2019, the Company commenced a fully funded 37-hole diamond drilling program on the Big Sandy project, which has produced exceptional results and high grade intercepts with a peak lithium value of 4,380ppm to date. On 26 September 2019, the Company announced a Maiden Mineral Resources at the Big Sandy Lithium project, which was estimated by Cube Consulting, in accordance with the guidelines set out by the JORC Code (2012). The Total Indicated and Inferred Resources were for a total 32.5 Million Tonnes (Mt) grading 1,850 parts per million (ppm) Li or 320,800 tonnes Lithium Carbonate Equivalent (LCE), reported above an 800 ppm Li cut-off. The Resource also included a higher-grade zone of 12.7 Mt grading 2,360 ppm Li above a cut-off of 2,000 ppm Li for 159,500 tonnes LCE, representing 49% of the total contained LCE.

The Maiden Mineral Resource was delivered 14 months after first drilling commenced at Big Sandy, in line with the Company’s rapid de-risking strategy. Significant potential to further expand the size of the Mineral Resource exists, with further drilling planned targeting Blocks B & C in the Northern Mineralised Zone (Figure 1), which remains open to the north, south and west. It should also be noted that the area drilled for the calculation of the maiden Resource represents a mere 4% of the landholding at the Big Sandy Lithium project. This estimate follows the successful completion of the Phase 2 diamond drilling program (37 HQ diamond holes totalling 2,881m), focused on Block A. See the below part of this page for drilling results from the best intercepts. The Big Sandy lithium project is located on interstate I93 between Phoenix and Las Vegas, comprising of 331 Bureau of Land Management (BLM) claims in Arizona, covering approximately 25km². The development of lithium projects is a priority for Federal U.S. agencies following the signing of the Executive Order ‘Federal Strategy to Ensure Secure and Reliable Supplies of Critical Minerals’ on 20 December 2017. Big Sandy is of strategic relevance, given the Tesla Gigafactory is located approximately 960km by sealed interstate highway to the north-west. 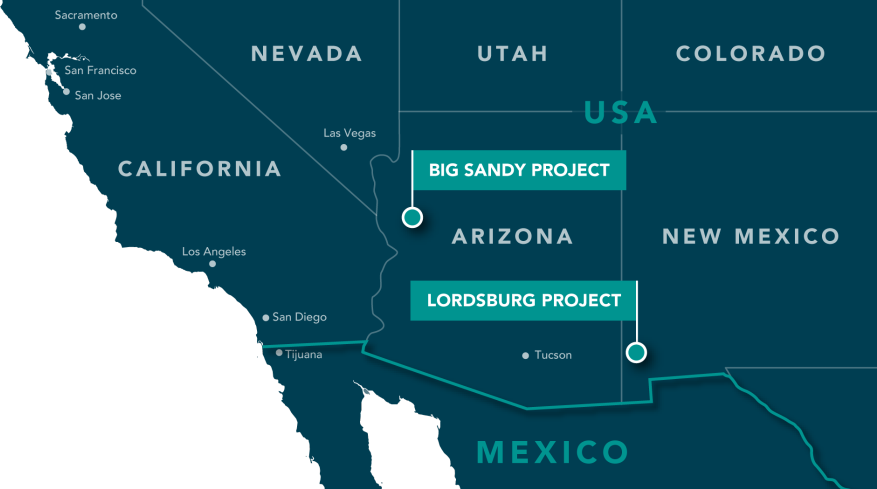 On 29 November 2019, Hawkstone Mining announced the results of the preliminary metallurgical test work, completed on a limited number of core samples from the Big Sandy lithium project, located in Arizona, USA. The testing program followed a successful maiden drill program and was purely designed as proof of concept that lithium could be extracted from the Big Sandy fresh material through the use of sulphuric acid as a metallurgical process. The preliminary test work program proved highly successful, as samples recorded lithium recoveries of between 85% to 97%, during a maximum leaching time period of 24 hours. Following the success of this initial program, the Company will continue to further optimise the results on a wider range of samples, with the aim of reducing acid consumption and leaching time.